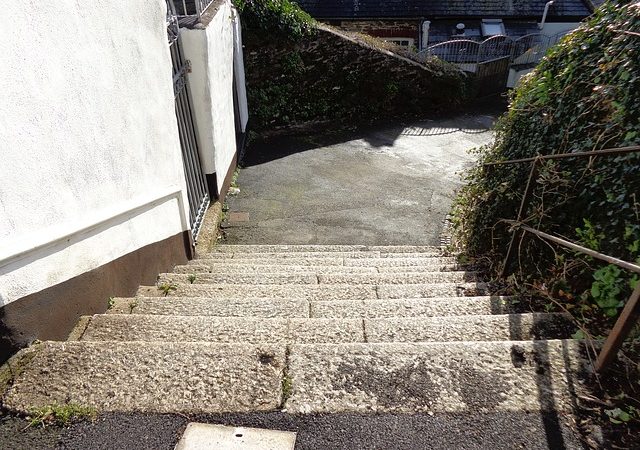 In December 2013, Susan Blackwell attended a house party at the home of Dean and Debra Franchi. When Blackwell went to the Franchi’s mudroom to put down her purse, the light was out, and she did not see the eight-inch step down from the hallway. She tripped and fell down the step and was hurt. She sued the Franchis for her trip-and-fall injury, saying they should have warned guests about the step.

The Franchis’ lawyers fought back against the trip-and-fall lawsuit, saying the step was an open and obvious hazard, so the couple had no duty to warn house party guests it was there. It turned out, the question of whether a dark step is open and obvious created legal questions among judges on the case.

Blackwell’s trip-and-fall accident depends on Michigan’s premises liability law, which sets limits on what homeowners and businesses must do to protect people on their premises. Because Blackwell was invited on the premises, the Franchis could be held liable if the invitee (Blackwell) could not reasonably have discovered the condition and realized the danger. Otherwise, the risk is considered “open and obvious” and the homeowners are not responsible for the injury.

Generally speaking, a step or drop-off doesn’t create a risk of harm. Steps are a reality of life, and a reasonable person can generally maneuver over them without a problem as long as he or she can see it. Blackwell didn’t see the step, so she couldn’t react to it. The question the courts debated over is whether she should have discovered the drop-off and realized its danger.

Should A House Party Guest Have To Turn On The Lights?

In a published opinion from January 31, 2017, the Michigan Court of Appeals considered testimony that the step was not easily discovered because there were no lights on in the mudroom and it was “pretty dark.” Witnesses said “[i]t looked like it just went straight across.” The Franchis argued that Blackwell could easily have turned on the light switch located at the door to the mud room and seen the step. But the Court of Appeals said that didn’t eliminate their duty to warn her about the step. The court held:

“The open and obvious danger doctrine focuses on the condition of the premises and the hazard as they existed at the time the plaintiff encountered them. There is no additional requirement that the plaintiff take reasonable steps to improve the visibility of the alleged hazard” (internal citation omitted).

In other words, the Court of Appeals said a house party guest isn’t required to do anything to the premises to prevent her own trip-and-fall injury. She must take the location, and its dangers, as she finds it.

Blackwell wasn’t happy with that decision, so one year ago she filed an application for leave to appeal to the Michigan Supreme Court. After a series of briefs on both sides, on March 6, 2018, the Michigan Supreme Court heard oral arguments on the case. The Court framed the issue like this: “whether [defendants] owed a duty to warn plaintiff of the condition on the premises, given the general rule that ‘[a] landowner owes a licensee a duty only to warn the licensee of any hidden dangers the owner knows or has reason to know of, if the licensee does not know or have reason to know of the dangers involved’”. A final decision on the trip-and-fall case could take weeks or even months, but it its Amicus Brief, the Michigan Manufacturers Association says a decision against the homeowners could “force any property owner to explain every potential hazard to a visitor.”

Involved In An Accident or Injured? Answers to 5 Questions We Know You HaveRequest Information